Hello and thanks for stopping by.  Today we have another post on our recent trip to Oahu.  Today's post is more somber as it deals with Pearl Harbor.

We have been to Pearl Harbor several times.  I find it important to know and understand that part of our country's history.  I strongly encourage anyone who will be vacationing on Oahu to take a few hours one day and spend time there. 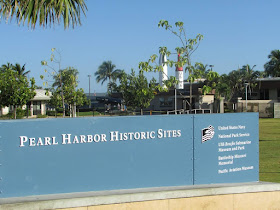 Did you know that after visitors enter the park (Pearl Harbor is overseen by the National Park Service) and prior to going out to the USS ARIZONA memorial, visitors watch a short film with actual footage of the December 7, 1941 attack?  A local physician had purchased a video camera for his wife for Christmas and he decided to try it out beforehand, just across the bay from "Battleship Row".  I believe it makes a real impact on a person to know that what is being viewed at the Pearl Harbor theater is actual footage.  Heartbreaking, saddening, and somber is how I would sum it up.

After the film, visitors then board a Navy launch and are taken out to the Arizona memorial. 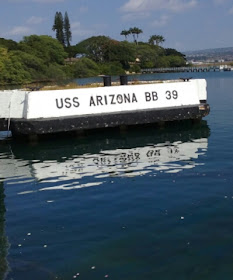 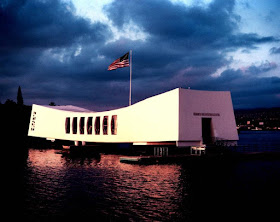 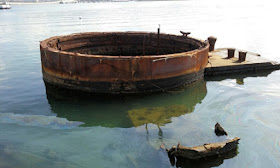 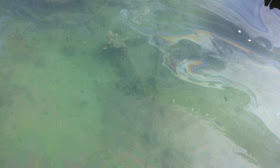 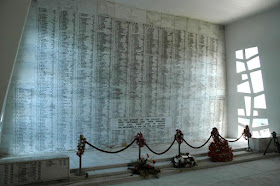 The Shrine Room at the memorial.  The names of the sailors who died during the attack are inscribed on the wall.  Prior to their passing, survivors of the Arizona can  request to have their cremains placed on the ship by Navy divers--those names are on the two smaller benches on each side of the wall.
Photo courtesy NPS

After 15 to 20 minutes at the memorial, a Navy launch then takes visitors back to Pearl Harbor.  There are several other exhibits that you can tour--I would suggest the audio tour.  We learned quite a bit having the addition of the audio for a nominal fee.

Don't forget to stop by the gift shop and check out books written by some who lived through the attack and served during the War.  Some days, a Pearl Harbor survivor may be on site.  Sadly, this is becoming less common with the passage of time.

I would also suggest that you go online to the above link and reserve tickets if you plan on going to the memorial.  They have scheduled times for the video and ride to the memorial and a few months in advance isn't too soon--if there are several people in your group, it can be more difficult to reserve the number of tickets that you need if you wait till the last minute.

Across the way at Ford Island, the USS MISSOURI is in dock.  It is another part of history I would urge you to visit.  The park rangers are very knowledgeable and you will see the very spot where the Japanese leaders signed their official paper of surrender.  According to our guide, the Japanese officials fully expected to be killed when they boarded the Missouri.  I am sure it was a relief when they lived and were treated with dignity.
Going below ship to galleys and cabins is interesting but nothing compares with the big guns of "Mighty Mo" --very impressive.  The Missouri was in service until the early 1990s, even seeing service in the Gulf War.  Find more info at https://ussmissouri.org/.

There is a lot of history, photos, and videos that can be seen at the above websites, too.  This is a really important of our history, as well as the world's.  Many thanks to those who have served and sacrificed and to those who continue to serve.