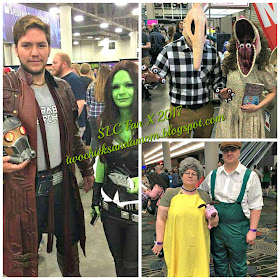 Hi all.  Recently Ali, my husband (her dad), and I went to Salt Lake City, Utah to attend Fan X.  SLC Comic Con is held in the Fall and Fan X is usually held in late Winter/early Spring.  This was our first time attending Fan X but we have been to SLC Comic Con before.  What is Fan X you ask?  It is an event celebrating fandoms--Dr. Who, Marvel and DC Superheros, Anime, video game characters, Steam Punk, and more.  Attendees are free to dress as their favorite characters or just dress as usual and take in all the sights!

As you can see in the collage photo above, folks are very creative and doesn't that young man look a LOT like Star Lord (Chris Pratt) from Guardians of the Galaxy? He has an Instagram at skylordcosplay  and a Facebook if you want to follow along. Gamora did a great job,too!
"Beetlejuice", anyone? I love that she is carrying "The Guide for the Recently Deceased"!  So clever!  Remember "Courage the Cowardly Dog" cartoon?  This couple is awesome.

This year at Fan X, the televison show "Psych" was featured, as was "The Princess Bride", "Once Upon a Time", Weird Al, and Stan Lee--Stan Lee--count us in! 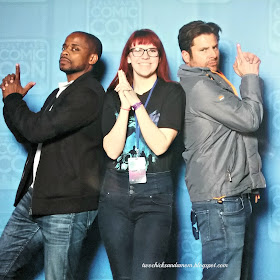 Ali Rose got to meet James Roday and Dulé Hill, "Shawn" and "Gus" of "Psych".  Exciting! 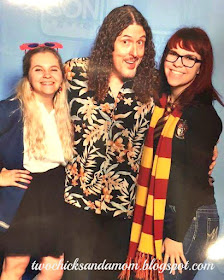 McKay from Yours Truly McKay met up with us and she and Ali had their photo taken with Weird Al!  Such fan-girling to be had.

The event is held at the Salt Palace for those of you familiar with Salt Lake City.  It's family-friendly but there were a few "Slave-girl Princess Leia" costumes lol.  Probably should avert your teen-age sons's eyes haha. 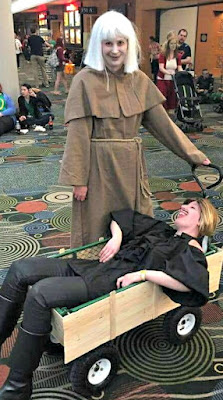 Fandoms wouldn't be complete without "The Princess Bride".  This is too good!  People thought of costumes I don't know that I would of. 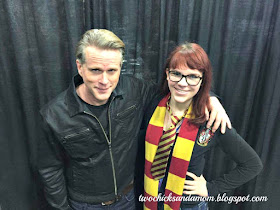 Ali also met Cary Elwes, Wesley himself from "The Princess Bride".  She said he was so nice.  We went to his panel as well; he and Chris Sarandon, who plays the King in the movie, answered questions and shared memories of their filming the movie.

If you are "Doctor Who" fans, then you will recognize these coats, the Clockwork Androids from the "Girl in the Fireplace" episode (so sad!), and of course, a Weeping Angel.  Plenty of Doctor cos-players were wandering around, too. 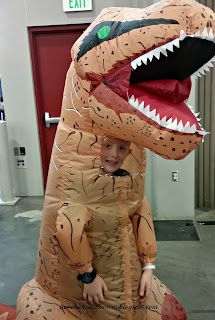 This T-Rex was adorable!  He was such a trooper and everyone loved his costume.

That's Ali, "speeding" away; Boba Fett appears to have gotten his bounty (Han Solo in carbonite) and Luke is defending the Rebel Base on Hoth from the Imperial Walkers.
Yes, we are nerds, geeks, or the like.....
I believe you can see that we had an awesome time at Salt Lake Comic Con Fan X!  This was Ali's Christmas present for 2016 (she got a VIP ticket, Dad and I only Gold) but we went to celebrity panels, did some shopping, and just had fun with watching the cosplayers.

Oh wait, Stan Lee!  Stan Lee of Marvel comics and movies fame was to make an appearance and do a celebrity panel but the poor man became ill and his doctor said under no circumstances was he to travel.  So, Stan Lee was nice enough (he loves Salt Lake Comic Con) to skype in for his panel on Saturday evening.  He was hilarious!  The man is 94 years young and such a hoot.  I used the word "hoot", my age is showing.....